The amazing Penan and Iban tribes ….

“The land is sacred; it belongs to the countless numbers who are dead, the few who are living and the multitudes of those yet to be born;” this is a quote from the Penan tribe of Sarawak, Borneo. I have had the pleasure of living with and learning from another tribe called the Iban, whilst living in Brunei. The Iban like most other tribes of Borneo have a unique and special relationship with the rainforest. Their knowledge and understanding of their surroundings is breathtaking and even now with the pressures of modern day life, (especially technology) they, still practise their traditions, whether it is basket weaving or hunting. The older Iban members still pass on their stories and teach the younger generations how to live in the rainforest. Today the Iban are a very welcoming and peaceful people, however, this wasn’t always the case. Before Christianity the Iban had a fierce reputation as headhunters and were one of the most formidable tribes living in Borneo.

One word sums up my time living in the rainforest with the Iban and that is, “SPIRITUAL!” I am not someone who uses such words in a trendy, hippy way, but someone who has come to respect and love the rainforests through the eyes of their guardians, such tribes as the Iban. Their respect and spiritual affection for the rainforests is born through their knowledge and understanding of their role in nature. They understand the importance and role the rainforests play in everyday life and only take what they need and is sustainable. Whilst living with the Iban I was shown how to hunt by making traps, how to fish, how to make simple, quick and effective shelters using the forest. Where I would see trees of green they would see medicinal plants and camouflaged insects! They have the ability to make animal noises, so call and attract birds and monkeys. Although I am well educated, up to degree level, I feel small and totally inadequate when I spend time with the Iban; their knowledge and understanding of the rainforests is far beyond ours and it is something we need to cherish and never lose.

Honey has always been an essential sweet treat and has been a valued and expensive commodity. None more so than in the rainforests of Brunei, where through history, honey has been collected for its pure enjoyment and the smiles it brings to peoples faces.However, there is a problem as sourcing honey can be a challenging and at times dangerous affair, due to the bees themselves. Bees have evolved through evolution and developed the perfect defence mechanism i.e. their sting. Those of us who have had the misfortune of being stung know that this evolutionary adaptation is very effective. This has meant that harvesting this delicacy, especially in rainforests where the bee species can be very aggressive, or the hives extremely high up in the canopy, can be problematic! As a member of the teaching community the idea of keeping bees hives in school has always been a big NO; that is until I discovered stingless bees. These bees are small, non aggressive and most importantly can’t sting and they produce a unique tasting honey which is very sweet but with a sour limey after taste. It is DELICIOUS!

Bees have been regular features in the news over the last few years as their numbers are in decline. Due to our modern farming techniques, the use of pesticides has had a real detrimental effect on bee populations around the world; in fact the market for bee pollination services is now big business, as there are some areas of the world where there aren’t enough bees to pollinate crops. At school l wanted to develop a program, run by the students where they had to develop a sustainable, environmentally friendly business. The students would be given a budget from which to work and from that they had to source tools, plants and the beehive. The aim of the project was that it had to be sustainable, i.e. had to be a continuous project which could develop over the next few years, it had to earn money so that in the future it became self funding and most importantly it had to have educational value. The project was started in October 2018 with a patch of forest in the school grounds, which over the last 8 months has seen a huge transformation.

Once the benefit and value of the project was successfully negotiated (remember the concerns for keeping beehives in school…), the first stage was to clear the area of elephant grass and prepare the surroundings, making it suitable for the bees. A design had to be agreed, with particular emphasis on researching and sourcing the correct types of plants, as well as a water collection system. This all had to be in place before the first beehive arrived. A team of students worked extremely hard to create the beginnings of garden, fighting the heat, humidity and mosquitoes!

The beauty of frogs….

Species of frogs are discovered annually in Borneo and at present there are believed to be 178 known species. Frogs are amphibians, backboned animals that have adapted to living outside of water. Frogs have some unique characteristics which have enabled them to thrive in the rainforests of Borneo, 130 species of frog alone, (73%) can only be found on the island of Borneo. Frogs come in all sizes, shapes and colours and all have their own unique variations. Some like the Wallace’s flying frog has black, green and yellow patterns, and characteristic webbed feet that allow it to glide from one tree to another. The only time it’s found on the ground is during mating, when it constructs a bubble nest, while the Rock Frog secretes a poisonous venom from it’s skin as a defence mechanism. In 2008 a new species called the Bornean flat headed frog was discovered, (by the University of Singapore). This species of frog has NO LUNGS and is only 1 of 3 species of frogs which has been discovered with this adaptation. WHO SAID FROGS WERE BORING! 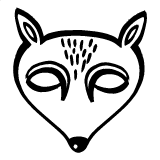